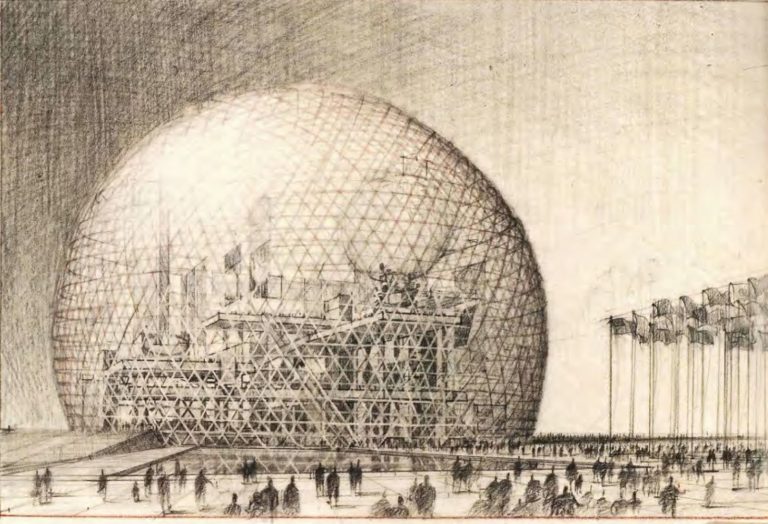 “Whether it is to be Utopia or Oblivion will be a touch-and-go relay race right up to the final moment… Humanity is in a final exam as to whether or not it qualifies for continuance in the Universe.” – R. Buckminster Fuller, Utopia or Oblivion

Fuller wrote this back in 1969, an incredibly productive year for him as both “Operating Manual for Spaceship Earth” and “Utopia or Oblivion: The Prospects for Humanity” were published.

These two books shape the essential thinking for humanity in the Age of Climate Change and the disruption of the 2020s. These two books, along with Alvin Toffler’s and Marshall McLuhan’s, supplied the foundation of my thinking as a futurist. I have frequently shared from stages around the world that “I stand with honor on the shoulders of the three greatest futurists of the last 75 years: Toffler, Fuller and McLuhan, to better see into this new century.”

The books written by these three deep thinkers are perhaps more relevant today than almost anything that is currently being published… at least from the macro point of view. Fuller looks at the big picture of the future of humanity. McLuhan provides us with the reality of living in an electronic village. Toffler predicts how culture, business and society will change.

All three are still the most accurate, big picture visionaries in print. Most of the rest of us live in the worlds they envisioned.

With the just released, exhaustive report from the IPCC we now are in the “code red” stage in terms of the sixth extinction event, which is happening NOW.  The only good news -silver lining- of this “code red” is that it will trigger the fight or flight response with humanity.  As a species, we are terrible at dealing with clear threats in the future.  We are reactive.  This is why the clear vision of Fuller decades ago was not heeded.  We seem unable to deal with “something horrible will happen in a few decades” until it is happening.

This column will focus solely on the challenges that Fuller laid out for us 50 years ago.

Concepts 1 and 2: These are simply the single best ways to explain why we have a climate catastrophe today. Humanity did not heed the clarity and deep insight of Fuller in “Operating Manual”. If we had examined everything we do, and how we do it, we would have seen the pollution, the degradation of habitats, the warming of the atmosphere and the oceans, the severe imbalances of population / food / water and the slow degradation of our quality of life.

As a result, we now find ourselves with pollution everywhere, a lack of water and food in many places, and at the same time ever increasing consumption of the Spaceship’s resources, a doubling of human population to eight billion, and  100,000+ species passing into extinction over the last 50 years. The sixth mass extinction event. The prior five mass extinctions saw 75% to 97% of all species disappear. We are on track for the very first extinction event created by one species – humanity.

We didn’t plan. We didn’t develop a spaceship consciousness. We did not embrace the mentality of crew members. We remained, at least the vast majority of us, as clueless passengers. We did not create a global systemic operating manual for our collective future. So here we are.

Concept 3: This is the other major metaphor for humanity in the 2020s, the fork in the road. One path leads to abundance, the other to destruction. 15 years ago, I was aware that we were approaching this fork. I now think that the 2020s is our last chance decade. Primarily due to our climate crisis, we are barreling down the road to destruction.

We have kicked the can down the road for 50 years. We waited so long that certain tipping points have come and gone. Climate change is accelerating, and that is a direct result of the increasing amounts of GHGs that we continue to pump into our atmosphere. Of the total amount of GHG emitted since the 1700s, over half has happened in the 21st century… the last 20 years.

Think of the fork in the road as the metaphor for all that we see. Many of us are pessimistic… feel that it’s too late. COVID-19 has only amplified this negativity and hopelessness. The evidence that mass media give us is cataclysmic and the scientists substantiate. Many others, and I am in this camp, feel that there is still hope, but we must mobilize collectively and forge a new path forward. There is extreme urgency to build a detour back to a path toward utopia.

As many readers know, I am one of the initiators of the #forkintheroadproject. This initiative is to create a sense of urgency in facing the climate and other big issues confronting humanity in this decade.  We must act if we want to get off the road to oblivion and onto the road to the good future we can create…. if we want to.

The fork in the road can be seen in the weakening of democracies and the proliferation of autocracies.

The fork in the road can be seen in the widening of the gap between rich and poor, in the bastardization of our capitalist economic system, in the rise of social unrest and populism. A societal collapse is inevitable if we don’t make a drastic course correction.

The core choice we must make is to reject divisiveness. To eliminate “us vs. them”. To join together. In order to get back on the right path, we must develop a growing sense of WE.

WE need to believe that, together, we can right the wrongs, and restore what we have destroyed.

WE need to reembrace science.

WE need to integrate humanity beyond nation states into one global union.

The 2020s is the decade when, “Humanity is in a final exam as to whether or not it qualifies for continuance in the Universe.”

[NOTE:  much of this column was published simultaneously on The Sarasota Institute – A 21st Century Think Tank ]

Email
Prev: The Future of the Workplace #2
The Climate Crisis: From Denial to Disconnection: Next