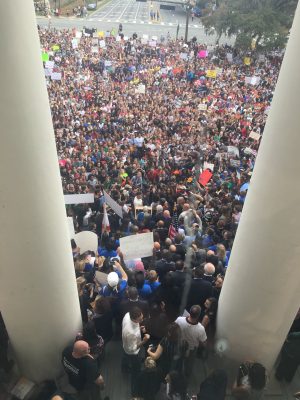 So much eloquent prose and commentary has already been written and spoken about the teenagers from Margery Stoneham Douglas High School here in Florida. How they have clearly captured the high moral ground in the debate about assault weapons in America.  How they have a steely, non-smiling, eyes into the camera, clarity and purpose.  How […]

The title of this column is an obvious lift from James Carville’s famous line about the 1992 election: “It’s the economy, stupid”.  That is probably the most quoted campaign statement from TV talking heads of all time, certainly since he uttered it 25 years ago.

In this past year [or two] of politics and elections, much has been made about what is going on with national elections.  The pundits have looked at what has happened largely through the lens of traditional political thinking.  The rise of populism and nationalism.  The global elite class leaving the eviscerated middle class and lower classes behind in the rush to embrace globalism.  Well, okay, that is certainly true to some degree.  But these lenses of traditional political thinking do not fully explain the realities of what has and is happening.

The Times They Are A Changin

This is the Transformation Decade a name I coined on 01/01/10. The dictionary definition of transformation is “ a change in form, appearance, nature or character” Given the current political, social and economic climate in America and the world today, this description certainly pertains. Most institutions, certainly businesses are actively going through some form of […]

2016 was really a year to test all of us one way or another. Beloved icons died, anger and resentment determined elections, and what we thought was reality turned out to not be. Disorientation, death, disruption, depression and delight were all felt by large portions of humanity, as the year landed body blows to the […]

[Note: parts of this column first appeared in the Sarasota Herald-Tribune. Also note that this will be the first of several posts relative to the election. Emotions are all high and this will be top of mind to millions around the world so it is a good portal to discuss what is ahead and what […]

I have been an admirer, yes, even a fan of Elon Musk ever since I first learned about Tesla Motors ten years ago. I state that because now it seems that Elon Musk is everywhere in the media – on-line, magazines, a best selling biography [which I have purchased but yet to start]- simply because […]

Note:  This first appeared in the #35 issue of the Shift Age Newsletter Chronologically we are half way through the decade. We humans think of time as linear so 2015 is five years, or half way through this decade. However, the speed of change is ever accelerating. This means that we have experienced about one […]

NOTE: The column below was published on January 1, 2010, or 01-01-10, a very interesting digital date. I am republishing it for several reasons. First, it has become a very powerful metaphor when giving speeches or leading corporate and government retreats. The concept of transformational change as described below makes change, large and small, more […]

Marijuana and the Rapidity of Social Change

Think back five or six years ago to 2008 or 2009. If you thought about equal marriage for people of the same sex what did you think?   If you were gay or knew someone who was and wanted to be married you had clear and perhaps deeply felt views. If not, perhaps you thought […]

Perhaps the most significant event in global health care for 2014 occurred on February 25.  This was the day that Health City Cayman Islands had it’s grand opening.  Health City is a new way to think of health care and health care delivery.  It has within it the power to change or at the least […]