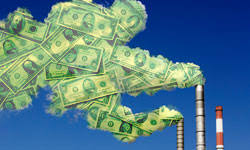 Finally, there is a groundswell for a unique, creative, possible piece of legislation that could have both a profound effect on reducing carbon and creating consensus in Congress.  Solving two of the biggest problems the U.S. has today.

We simply cannot let this opportunity go away!

Back in February of last year I wrote about this opportunity in its first iteration, the Climate Leadership Council   The essence of the column, and the reality at that time, was that some of the most significant names of the recent history of Republican, George Schultz, James Baker, Henry Paulsen and Gregory Mankiw, had joined Ted Halsted, the founder of the CLC along with Rob Walton, former Chairman of Walmart and Thomas Stephenson of Sequoia Capital, had come up with a free market way to address the carbon problem.

Based upon the thinking of Milton Friedman the economist beloved by Republicans ever since President Reagan embraced him, this unique concept of a carbon fee was introduced with Op-Ed pieces in the Wall Street Journal and the New York Times.

The math is exquisite and simple.  Place a fee of $40 on every ton of carbon at the point it enters the U.S. economy.  In the first year this would raise some $200-300 billion.  Rather than a tax, which means the government keeps the money, this would be a fee that then flows back directly to U.S. citizens to offset any increase in the cost of living due to the $40 fee.  The projection was and is that every family of four would receive a check for $2,000 per year.

One of the primary reasons the CLC came up with this plan is that it would be much more effective than all the regulations that, largely, the Obama administration had put in place.  Replace regulations with a free market solution.  Right up the Republican’s alley.

The smartest person I know on this topic is my good friend Mike Shatzkin, who, while still being the book publishing industry’s futurist, has now become a proactive force facing climate change.

In a guest column at The Sarasota Institute [Note: I am a co-founder of this 21st century think tank] Mike presented a good overview of this opportunity with the larger context of why CO2 emissions is the biggest threat to humanity.

In my column linked to at the top, I framed the solution as one developed by “the Wise Republican Elders”.  Even though the title of that column was Climate Change is Physics not Politics, unfortunately the topic had become politicized.  Loosely, the Republican Party questions the reality of climate change while, supposedly Democrats feel and accept the threat.  So, I felt that, giving Republicans the cover of such names as Schultz and Baker would loosen it all up.

I was surprised when, a couple of months after I wrote the column, I had the opportunity to help a prominent Republican Congressman change his position on climate change.  During our meeting it became clear that he was unaware of the Baker-Schultz initiative.  I assumed then and now that this happened right around the time Trump became President so that was the party’s over riding concern at that time..

Well now there are new developments that are heartening.  The CLC was non-partisan.  There is a new group, Americans for Carbon Dividends that has, as its’ core goal to have this issue become a bipartisan effort.

In a simple, persuasive, straight forward Op-Ed in a recent New York Times, Trent Lott, a former Republican Senator from Mississippi and John Breaux a former Democratic Senator from Louisiana called for bi-partisanship to make a carbon dividend a reality.  The mid-column headline is “A fee on emissions could be a boon for American wallets” points out the obvious; if American families could get a $2,000 check a year and help solve our country’s carbon emission problem, why would they not let their congressman, congresswoman, or Senator know they want this passed?

The immediate issue is to get both parties to stop thinking partisan and start thinking collaboratively on something that has absolutely no downside.  Even Exxon/Mobil supports this approach.  One would think that Republicans would accept something crafted by hall of fame members of past Republican administrations and that Democrats would rush to embrace something that does two things they want: face climate change and have redistribution of fees back to citizens

This is early stage irresistible force meets immovable object.  The former will ultimately prevail but needs some current members of Congress from both parties to join the effort.  Again, Mike Shatzkin presents  the case for why Democrats and liberals need to jump on this now here and here.  Why any Democrat who is concerned about climate change and wealth inequality wouldn’t immediately support this is beyond me.  This is a moment in time for bi-partisanship.

If they still want to stay in their bunkers about health care, taxes, and gender issues, well that is up to both parties.  To not come together for this effort truly means they don’t care or don’t think.

Let’s break the climate impasse and help American families at the same time.

If you find any of this positive and worthy of support, please speak about it and let your representatives in Washington D.C. know that this makes sense and should be supported.  For years I have said that the people are leading the leaders around the world.  We all must continue to lead until our “leaders” do the right, obvious and easy things.  This is at the top of the list.