The Significance of Singles Day 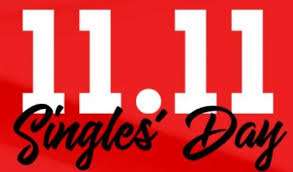 Singles Day was November 11, 2019 in China.  During that 24-hour period $38 billion in sales was reached, all on-line.  This is a phenomenal number when compared to more common American shopping metrics.

Singles Day was created to honor singles, to offset Valentine’s Day, giving a chance to honor those not in a romantic relationship.  It was pegged to be on 11/11 as a result; a date with all 1s [Those of you who dabble in metaphysics already know the significance of this date.  You know who you are as you were paying attention at 11a on Monday 11/11:  11:11:11/11/19]  It is now the biggest shopping day in China.

Cyber Monday began in 2005 and Singles Day began in 2009.  So, the rate of growth and total sales in China has been greater than in the U.S.

These numbers point to some truly amazing ascendant trends. First of course is the resultant collapse of physical retail in the U.S over the past decade. Vacant retail spaces are everywhere. The growth of Cyber Monday has taken sales from the physical retail reality of Black Friday.  If one factors inflation, then the rate of increase revenue of Cyber Monday far exceeds that of Black Friday.  On-line sales will continue to increase at a greater rate than physical sales.

Another amazing statistic from Singles Day in China is that 98% of all Internet users are mobile.  That is correct.  Anyone who has traveled in China knows that it is a mobile obsessed connected population.  I saw more people carrying two smart phones and/or portable battery charging packs than I ever see in the U.S.  This is the direction that the U.S. is moving.  In recent years there has been a sharp increase in on-line sales on mobile devices.   In 2017 the percentage of total on-line retail that was on mobile devices versus laptops and computers was 35%.  In 2020 it is expected that 50% of all on-line sales will initiate on mobile devices.

In the space of 20 years we have gone from almost all retail sales coming from physical retail to 12-14% being on-line.  So, some 6-7% of all retail sales in the United States in 2019 is from mobile devices.

The larger, obvious dynamic is that the electric connectedness – one of the three flows of the Shift Age – is completely altering the structures of reality.  It is possible to stay at home and shop for everything, eat restaurant food delivered by all the delivery app services, stream programming from around the world, play video games against anyone in the world and of course work from home with no sense of isolation.

This is what 3G and 4G has brought us.  All forms of mobile transactions are increasing and would increase in this 4G environment.  We are about to move to 5G, 100-times faster than 4G.  This moves us closer to simultaneity of communication.  When a 2-hour HD movie can be downloaded in seconds, we have moved to the point when electronic connectedness is perceptually instantaneous.

This reality means that, combined with the deeper relationships younger generations have with their hand-held devices, we are moving to a world of availability in our hands.

To paraphrase the folk song:  we’ve got the whole wide world, in our hands.