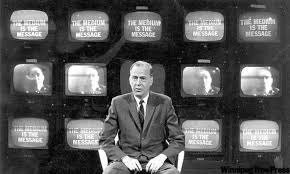 “The Medium is the Message”  – Marshall McLuhan

It is fair to say that Dr. McLuhan is the greatest philosopher about media that has ever lived.  He wrote in the mid-20th Century and basically influenced how the world thought about Television. “The Global Village” was created by electronic media.  All his commentary on this subject is still completely relevant to the Internet Age, even though he did not live to see it.  One could read McLuhan’s words from the 1960s and 1970s and think he was writing about the Internet.

What does this have to do about the impeachment drama now being played out in Washington?  Simply that this is the very first impeachment proceedings to occur in the world of high-speed wireless connectivity.  In 1998 [Clinton Impeachment] some 90 million people in the U.S. has Internet connectivity.  Today that number is 300 million plus. Furthermore, most if not all of the 90 million were connected by a T-1 line, meaning they were all place based in offices or homes.  Today, those 300 million people are accessing the Internet wherever they are via 4G wireless with hotspots everywhere.

Today, one of the biggest tropes in mainstream media is that America has become tribal.  That we all live in echo chambers that reinforce our beliefs.  That some people watch Fox News and others watch MSNBC.  That we all only pay attention to programming that supports what we believe to be true.  McLuhan would most likely say that this statement was less relevant than the fact that we are all plugged-in, dialed-in and watch whatever we want, whenever and wherever we want. We are all in a single, connected cyberspace that has all of human knowledge and activities.

We are on-line, not off-line. We are watching live coverage on our phones, not reading a book, or listening to the radio, or reading a newspaper.  We all actively live in this new hyper-connected global village.

I am of an age where I can remember the Watergate hearings on TV.  One had to be home to watch, much of it during the day.  Now, say you live in NYC, you will see people watching the live trial on the subway, on park benches, at work, on the bus or in Uber rides.  It will bring not only a commonality of watching, but everywhere, every time and on any screen.  This is the McLuhan reality.

If a picture is worth a thousand words, watching a live trial – or video highlights all the time- is worth tens of thousands of words of hypocritical politicians.

This is the underlying reality of how fast the numbers are moving in favor of impeachment in recent weeks.  The same uptick occurred in 1974, but at a much slower pace as there was only daytime television or next day newspapers.  This will be all the time, all-access impeachment trial.  The jury that counts, that will affect how the senators vote, is always watching.

The Democrats are expecting that decorated war veterans, life-long top tier State Department officials and national security people will be very compelling witnesses.  I am truly curious to see how the Republicans will put forth the on-camera defense of the President and how successful these same Republicans will be in continuing to attack “never Trumpers” that show up with medals and exemplary CVs to speak under oath.

For the last two decades I have said:  “If you don’t know what to think, watch cable television “news”. What cable television does do is blanket coverage of events, and certainly an impeachment trial.

“The Medium is the Message” in this case means that the filter of Fox News, MSNBC and chosen web sites will continue their filtering but the jury of public opinion will be weighing in from the subways, buses, taxis, airport gates and lounges, airplanes themselves, offices, and hotel rooms due to the unprecedented connectivity here in the Shift Age.

It is the accelerated connectedness – one of the three flows of the Shift Age – that will be the single biggest dynamic of the 2019 impeachment trial.  It brings to mind another meme from 1968:  “the whole world is watching”

Email
Prev: Moving to a Finite Earth Economy – Now!
The Significance of Singles Day: Next