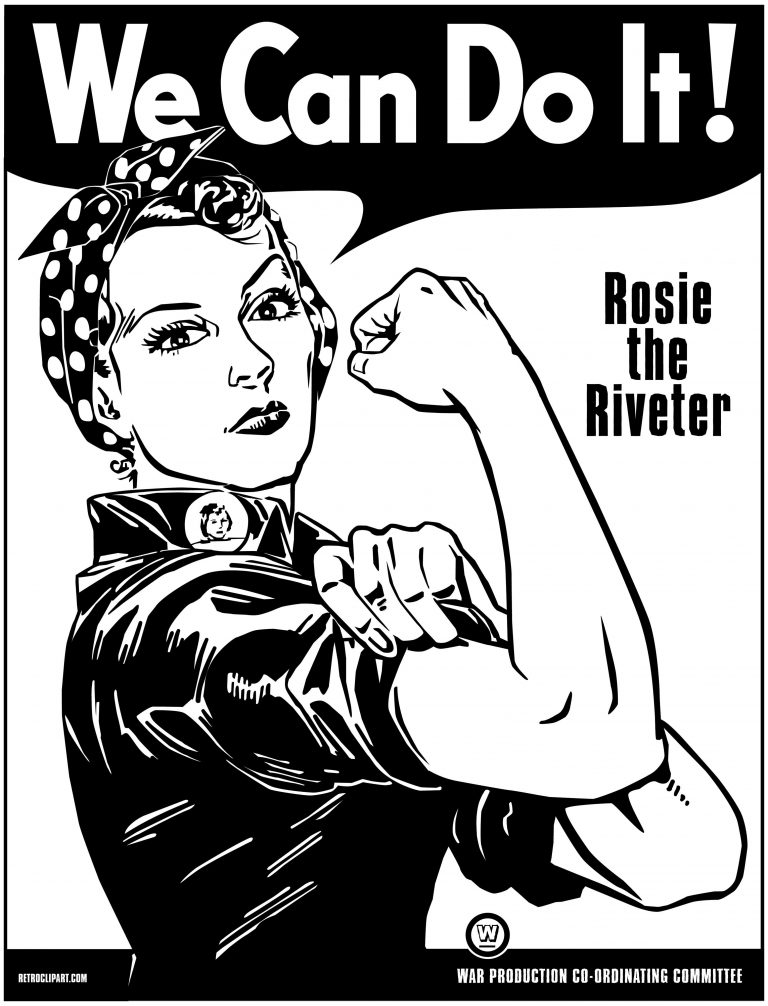 For the last 20 years – the 21st Century so far – I have been lamenting that America has fallen into what I call a vision deficit. During much of our history we have been a vision-driven country. These visions have united us and motivated us to become the greatest democracy in history. That ranking is now at risk due to this chronic deficit.

America has always risen to the occasion. Going back to WWII, our country united against common threats. During those four years of war, we developed the greatest military in history, defeating the fascist Axis powers of Japan, Germany and Italy. The triumph on the battlefields and the oceans was supported by a fully united country. What became known as the “home front” was a truly mobilized citizenry backing up “our boys overseas”. We rationed food, rubber… all kinds of metals and supplies. We did without to support the war effort. Women poured into the factories to manufacture everything that was needed on the battle fronts. Rosy the Riveter is the best-known symbol of this effort. On the coasts we turned out the lights at night just in case our enemies might attack from the air. Whatever it took, we did. We won. The generation that did this became known as the Greatest Generation, having survived the Great Depression and winning the war.

We became a symbol of freedom. We created “the American Way of Life” and exported it around the world. The Cold War had begun, so (with the help of Hollywood and Madison Avenue) we promoted America’s democracy and consumer society as a shining alternative to the dark, stark and communist Soviet Union. Boomers came of age during the darkest part of the Cold War in the 50s, 60s and 70s. We lived with the existential threat of nuclear annihilation. With the collapse of the Soviet Union in the early 90s, America rightly concluded that we had defeated the evil empire and had won the Cold War.

During the 1950s and 1960s, America and the Soviet Union were in the “space race” to first orbit the earth and then to land on and return from the Moon. The Soviets beat us to orbit with their “Sputnik” in 1957. So we fueled the greatest expansion of scientific research and development in history, spurred on by JFK’s vision that, “This nation should commit itself to achieving the goal, before this decade is out, of landing a man on the moon and returning him safely to the earth.”

Back to the 1990s. Winning the Cold War made us feel triumphant. There was an unprecedented bull stock market run, and the first Internet tech boom. Good times, new wealth, rising tides all around, we sated ourselves.

We entered a new century with a sense of victory and material well-being. Then 9/11 happened and ushered in a new age of terrorism and radical Islamic fundamentalism. This was a different war… launched by foreign terrorists on US soil. Our retaliatory actions were carried out by a small segment of citizens who comprised a volunteer army. There was no draft. It was truly compartmentalized, kept away from our mainstream lives. Our leaders told us to “go shopping”. There was no feeling of unity like what we experienced when fighting the Soviet Union or the Axis powers decades earlier.

One could conclude that America needs an enemy. With no outside enemy to unite us, to force us to recalibrate, we compete and fight each other. It began with a recount election decided by the Supreme Court. Then the Tea Party, government shut-downs, red states/blue states, Trump, “alternative facts” “media bubbles”, and total partisanship in Washington D.C. that gridlocked government. We had become a self-centered, selfish, and rude country.

We had gone from fighting an external, common enemy to fighting with each other.

We had lost a unifying vision of us against them. Instead it was us against our neighbor.

I don’t know why America needs an external enemy to create a common national vision, but we seem to. For the last two decades America has been drifting with no unifying vision.

This is the back story of the COVID-19 virus. The Trump administration did not understand how the virus gave us the opportunity to unite against a common enemy. IF we had been asked to come together… to all wear masks (following the example of a leader), to self-quarantine, to temporarily forego celebrations and in-person events, we would have come together, neighbor with neighbor, community with community, institution with institution, to defeat the virus. The irony is that if that had been done, and our president had delivered a daily message of unity against a common enemy, we would be acknowledging a landslide victory for President Trump in this last election. But he didn’t.

I feel a deep sadness, along with concern and fear. What a missed opportunity to unite red and blue, black and white, south and north, rich and poor of America.

We now have an even greater opportunity, an even more compelling enemy to unite against. Now that we see daily reports of much more powerful and frequent storms, “once in a century” floods and droughts happening annually, unprecedentedly  large and damaging forest fires, species extinction at a rate never experienced during man’s time on Earth, and a trillion dollars in damages last year due to “natural causes”… I defy anybody to credibly deny climate change. Our climate crisis is here and now… a clear and present danger.

Every living thing on the planet has a common enemy: how humanity lives on Earth. The way we live, that consumer society writ large across the planet, is generating the greenhouse gases that fuel climate change. Addressing our climate catastrophe is not ‘Saving the planet.” The planet does not need saving, it has been around for 3.5 billion years and will be around for billions more. Facing this crisis is about “Saving ourselves from ourselves”. Humanity is the most invasive species that has ever been. We must all come together. We cannot successfully face our climate crisis with an Us/Them consciousness. We can only be successful as a collective WE.

Five years ago, I co-authored a book and co-founded a non-profit with planetary ethicist Tim Rumage. The book was called “This Spaceship Earth” and the non-profit is https://thisspaceshipearth.org/ . Both are aimed at creating crew consciousness. To quote Marshall McLuhan: “There are no passengers on spaceship earth. We are all crew.” We must start acting like it.

Every living thing, every human, every American has the same common enemy. We all will succeed or fail depending on whether we develop a common, global crew consciousness to face a species level threat.

Email
Prev: The 2020s: The Most Disruptive Decade in History
Change Does Bring Opportunity / What have you learned in 2020?: Next