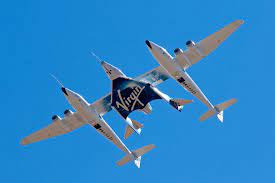 Congratulations Sir Richard Branson on your first flight into space, on your own spacecraft!  It was a childhood dream made real.  That seemed to be your key message to those on earth; that if someone from the boomer generation could go from childhood cardboard to the creation of private space travel, what can the generations that follow dream into their realities.

I have followed Virgin Galactic for more than 10 years.  As a futurist it has always been clear to me that private space travel was something inevitable to begin in the first third of the 21st century.  In fact, I forecast that it would be by 2020 that the first such flights would occur.  I was off by a couple of years as Virgin Galactic will offer flights to the paying public in 2022.

In 2010 I was fortunate to get a tour of Spaceport America in New Mexico when it was in early construction phase.  I recorded several videos at the hard hat construction site.

Those that create the future live in a unique place.  It is one where vision is the driver, the existing legacy thinking and businesses challenge the vision and resist it in open and hidden ways and the visionary must stay true for a longer time than initially expected.  Sir Richard Branson has lived for 17 years with the vision he delivered to us on Sunday July 11, 2021.

Futurists who speak and write about the future often must stand in ridicule and resistance until their forecasts or visions of the future prove true.  I remember that when I started to tout Virgin Galactic and the concept of commercial space travel happening in a decade’s time 10 years ago, people simply did not believe it would happen that soon.  It has.

Now, I hope that the history of technology becomes the future of commercial space travel in the next two decades.  The lower quality flat screen TVs that cost $10,000 20 years ago are now of much higher quality and cost under $1,000.  Perhaps by 2035 the advances and scaling of the private space industry will result in flights that are $25,000 or one tenth of what it will cost in 2022 and will last for a longer time.

If that is the case, we have Sir Richard Branson to thank for starting us on the trajectory of private space travel.