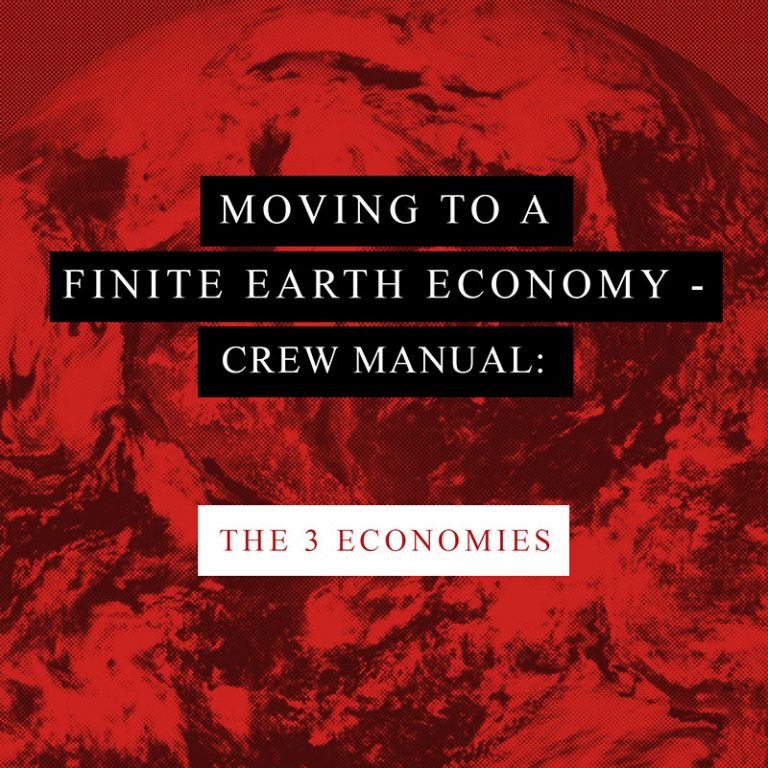 [ This is Chapter 4 of my latest book, which is the first of an eBook trilogy “Moving to a Finite Earth Economy – Crew Manual. It was first published at the Sarasota Institute, a 21st Century think tank two weeks ago. The subtitle of the first eBook is the name of this chapter, The Three Economies. All three books are to be priced at $2.99. Book 1 is now available on Amazon ]

“Anyone who believes exponential growth can go on forever in a finite world is either a madman or an economist.” – Kenneth Boulding (economist)

“Entering the 21st century, the vast majority of humanity has been living in a world with a footprint greater than the planet’s capacity. Clearly, humanity cannot continue to live beyond the Earth’s means… we must alter the trajectory, the thinking, and the practices that have placed us in this mission critical state.” – Houle and Rumage, This Spaceship Earth

Here we are, 19 years into the 21st century. We have postponed preparing for global warming and climate change for 50 years. We are now confronted with the reality that both are here, now. We put ourselves into this current position of “fight or flight”.

I have long thought that the 21st century would be the Earth Century. It has been a major concept in my presentations for the past decade. This is the century when we collectively prioritize our relationship with planet Earth above all else.

“The twenty-first century will be the Earth Century. It will be during this century that humanity faces the reality of whether it wants to destroy itself, and much of what exists on this magnificent planet, or not. Assuming we make essential course corrections, future historians will write about the Earth Century as a turning point in human history… So stop getting excited about Earth Day. Retire that thinking and refocus on the next ninety years of the Earth Century.” – David Houle, “Entering the Shift Age” 2012

As a futurist, I have stated that we left the Information Age and entered the Shift Age. Ranging roughly from 2005 to 2030, this is when much of human reality shifts to the new, future reality. It’s a transition from what was to what will be.

“The Shift Age is and will be the age when humanity alters its sense in relation to our planet. This goes way beyond what we think of as the environmentalism of today. It is a much more long-term stewardship point of view. All of our previous history has been about economic growth and use of the planet’s resources for our immediate needs. The Earth seemed to be unlimited in its space, resources and ability to absorb whatever humanity did. No longer.” – David Houle “Entering the Shift Age” 2012

How will humanity be living at the end of the Earth Century? Will civilization be at the same level as we have now? In a basic and existential way, the answer is truly up to us. Our future is ours to design, create and live.

“We are called to be architects of the future, not its victims.” – R. Buckminster Fuller

A huge part of shaping our collective future will be how we change the global economy and all our respective nation state economies. Driven by the Carbon Combustion Complex, the growth economies of today must cede to a new economic model.

In the Earth Century, humanity will have to move away from our growth economy paradigm. There are alternatives to the growth economy. We focus on two that are designed to slow our destruction of the biosphere. They are the Circular Economy and the Finite Earth Economy.

The chart below frames all three:

Let’s look at each of the three economies.

The American Dream has been exported around the world. It is the dream for more: more cars, more factories, more buildings, more freeways, more money, more houses, more appliances, more everything. The dream has become a nightmare, wreaking havoc across the globe.

Every reader of this book has lived his or her life in a Growth Economy. For most of history, humans have lived in growth economies. Think about how the economic health of any developed country is measured. All the metrics concentrate on growth, expansion and output. Gross Domestic Product (GDP) is an output. We measure the success of a nation’s economy by how much growth has occurred in its GDP.

In all of these growth economies, there is little or no accounting for the use of natural resources. Countries behave as though Mother Nature provides its bounty for free. Our current form of Capitalism does not take into account the value of natural capital. 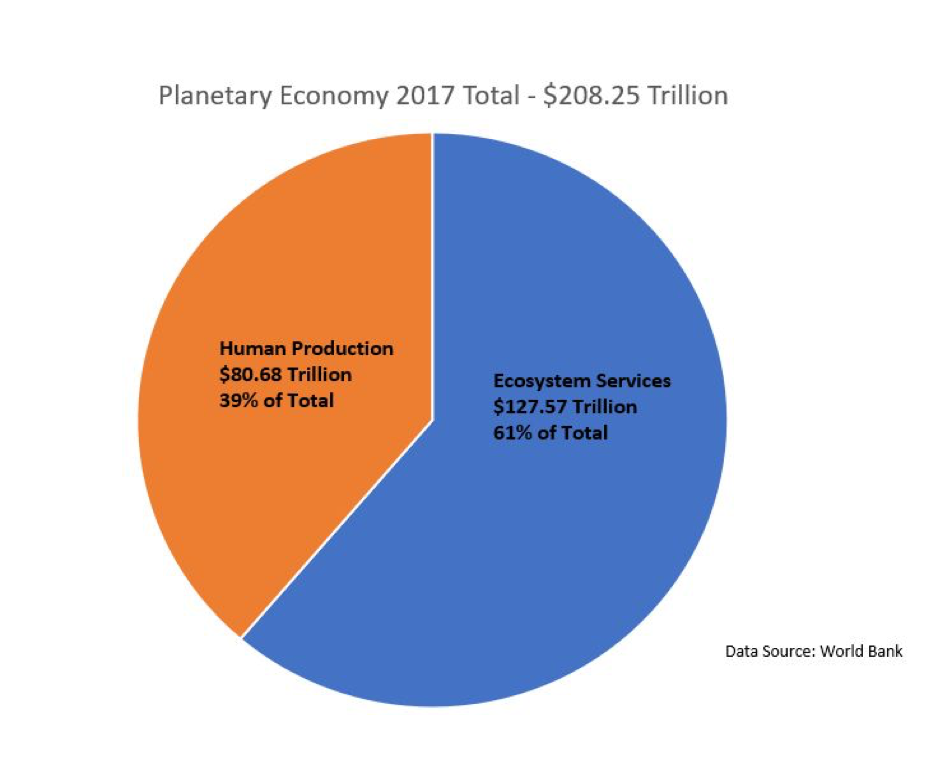 It is time to redefine global GDP by taking a more planetary approach, one that values Nature’s resources. More on that ahead when discussing the Finite Earth Economy.

Currently, natural capital is not accounted for in the financial reporting of Growth Economy corporations. And the majority of GDP (measured in dollars) is purchased by individual consumers. In the United States, the world’s largest economy, consumer spending accounts for 70% of GDP. Our consumer society urges us to shop, buy, buy, consume, buy more. Keep up with the Joneses. Your self-worth is determined by how much stuff you accumulate. When a product begins to wear… throw it out. Buy another one.

This is now a major problem because we are consuming more than Earth can regenerate. Americans’ annual consumption is at the rate of five Earths. In other words, if all the world consumed at the American level, five Earths would be needed to support our current life style. 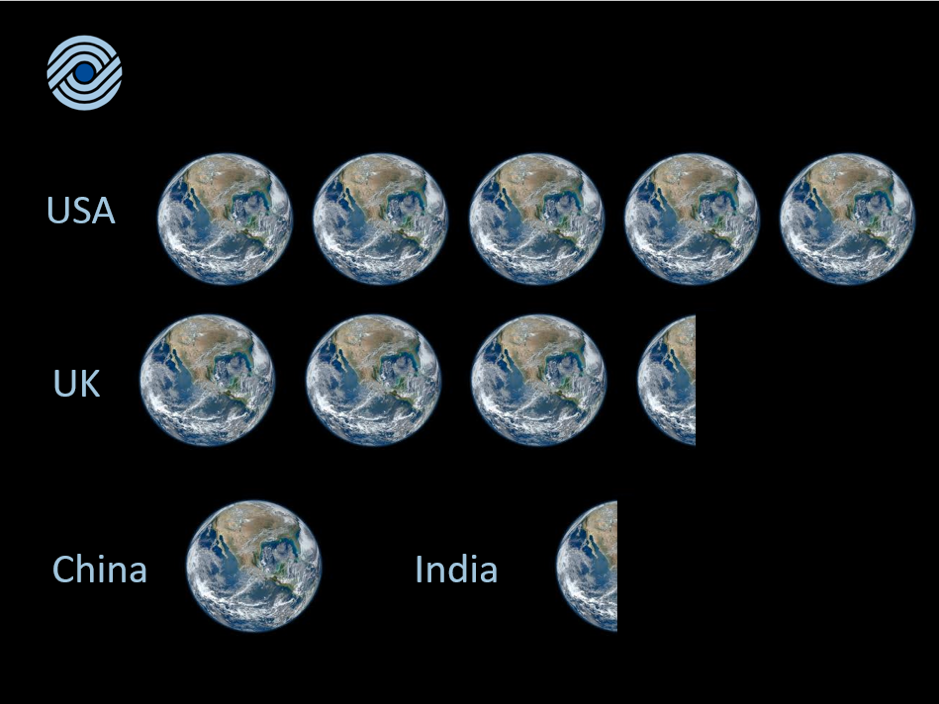 We have all been raised in this economic environment… where our personal consumption is disconnected from the depletion of planetary resources. We have been born and raised in a world saturated by advertising. We receive hundreds of messages every day, via every conceivable format, designed to persuade us to buy ever more things. As stated in Chapter 2, we should forgive ourselves for our planetary transgressions. We didn’t know that how we were living, collectively and individually, was stressing the planet. If there were only one billion people on Earth, it could support our consumer lifestyle… but there are close to eight billion people with more being born every minute.

So, we start with forgiving ourselves for what we have unknowingly done. Now that we know – know that we are at cause for global warming and climate change – what are we going to do?

We need to move away from our Growth Economy model as fast and as far as possible.

Environmentalists realized decades ago that our Growth Economy was the engine driving pollution, biosphere degradation and global warming. With the first Earth Day in 1970, an ever-increasing population of environmentalists decided to create an alternative economy. They named it the Circular Economy. The three Rs – Reduce, Reuse, Recycle – became a part of our lexicon. It espouses an economy that was to replace the produce, use and discard paradigm with a closed loop system that produced, used and then reused or reprocessed. The result would be lower consumption.

There are many smart climate scientists and environmentalists who still think we should embrace the Circular Economy. It has cachet in some circles as a viable alternative to the Growth Economy model. The issue is that, as of this writing, the size of the circular economy is roughly 9% of the total worldwide GDP.2 It is now 49 years after the first Earth Day in 1970, when the underlying concepts of the Circular Economy first became widely known and understood. If we had collectively stepped up and committed wholeheartedly to the development and expansion of the Circular Economy, perhaps half of the global economy would today be circular. Our climate change plight would be much less dire. 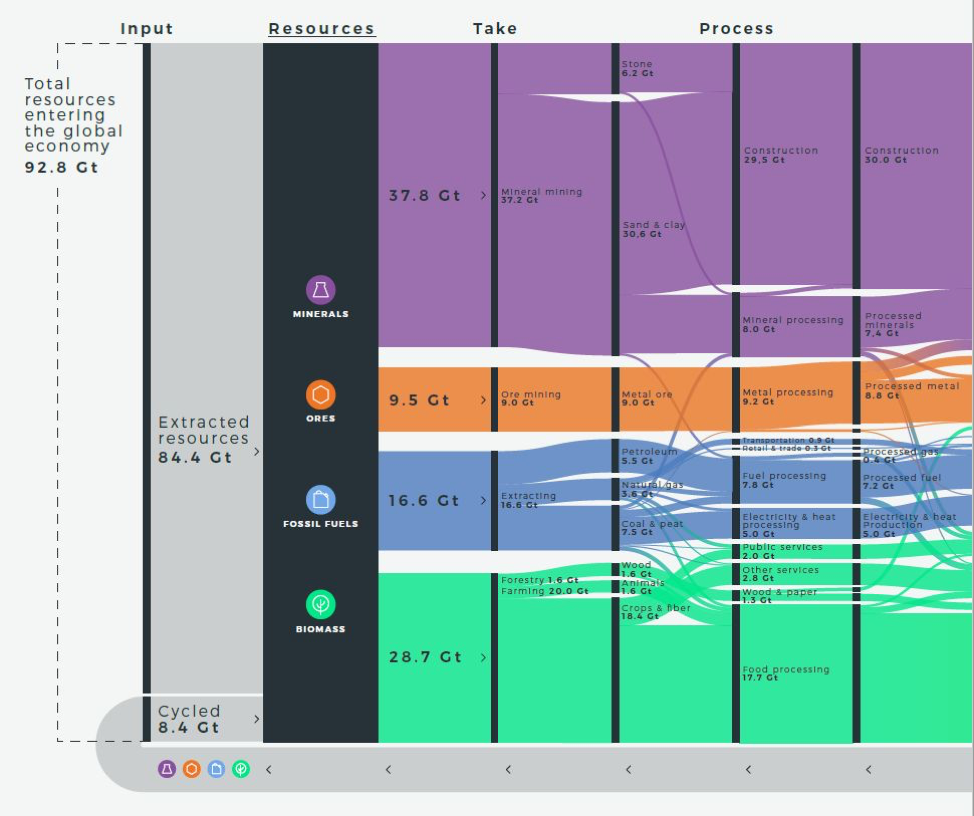 The Circular Economy would have been a great alternative to the Growth Economy, if a large percentage of the population had embraced it, but they didn’t.  Now, almost 50 years from that first Earth Day, only 9% of the global economy can be categorized as circular. This is another example of our choosing not to take action because climate change was perceived as a future, not a present threat.

We have squandered the past several decades and humanity has not collectively adopted a Circular Economy. And now it’s too late. It took 50 years to reach 9% of worldwide GDP.

In a Finite Earth Economy, Earth comes first. All economic, material and energy issues attend to the needs of the planet first… then humanity’s needs.

The premise of this book, and the reality of the urgency of our current situation, is that we must move to a Finite Earth Economy as quickly as possible.

MUST deploy a sustainable stewardship of planet Earth.

Email
Prev: Elon Musk: The Edison/Tesla/Westinghouse/Ford/Rockefeller/Bell/Goddard of the Digital Age – Part Two
The Center is not Holding: Next