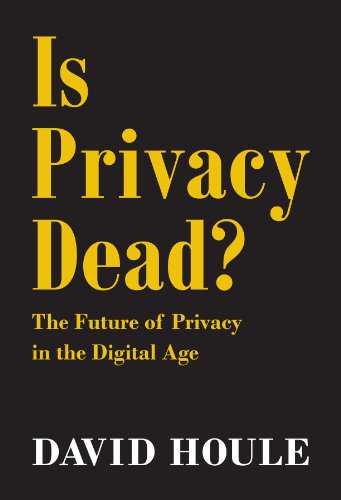 In 2013, after Snowden made his massive data dump, I was prompted to do a deep dive into the concept of Privacy.  This led to the writing and publishing of “Is Privacy Dead? :The Future of Privacy in the Digital Age” a short, e-book only, look at this topic.

In the wake of the Facebook fiasco that I wrote about in my last column here, I decided to go back and read the book I had written 5 years ago.  I had not read it for years. I was pleased that it was extremely relevant for the privacy discussion that society of 2018.  In addition, I found that some of the trends and dynamics I had written about have proven to be very true in the last five years.  As an author, one is always focusing on the next writing project.   So, it was refreshing and encouraging to read something written years ago to be both relevant and a good read.

Therefore, much of this column will quote from the book, again, written five years ago

In the Introduction, I wrote:

“I have consistently answered questions about privacy with the same general response:

2.There is no longer privacy as we knew it due to data always being captured by companies and governments.

This has been my position on privacy for more than a decade; that it is hypocritical to fully partake of the digital landscape and then complain about invasion of privacy.  This led to the first major conclusion of the book: that, through history as technology advances, privacy declines

This was a topic I first wrote about in 2006 in a column here.  Then in 2013 just prior to the writing of the book I published a column about the two realities of the Shift Age and focused on one, our screen reality.

In the book I looked back at history to see how significant communications technologies chipped away at personal privacy.  This started some 170 years ago with the introduction of the telegraph, the first technology to convey something happening elsewhere on the same day.

Again, from the book, about post-Cold War America:

“We were seduced by ever brighter, cooler technological gadgets that gave us mobility, connectivity, choice and new forms of community and tribal groupings.  We were happy!

“The choice for mankind lies between freedom and happiness and for the great bulk of mankind, happiness is better”

Then I quote some great Americans on the topic of freedom, liberty and privacy:

“The greatest dangers to liberty lurk in insidious encroachment by men of zeal, well-meaning but without understanding”   Louis D. Brandeis”

The second major conclusion of the book was that, as humans and certainly as Americans, convenience wins over privacy.  We like convenience.  We use Apps because they make life easy and convenient.  Every time we use them we give up some privacy.  The album title of the punk rock band The Dead Kennedys reflected this trend:  “Give me Convenience or Give Me Death”

In the book I mention that America was outraged – and then ultimately relieved- that Nixon actually taped conversations!  How intrusive!  How Big Brother!  Well, almost 50 years later our obsession with convenience has made us accept that almost every communication or transaction in the digital age is being recorded.  We willingly accept this.

Before giving an updated definition of privacy, I sum up at the end of the book:

“So the current discussion of privacy and the loss of it may well be, when viewed in the long term,  a transit to a new evolutionary human consciousness of collective and shared thought that is still somewhat hard to imagine.  As the definition of the self becomes ever more global, ever more connected, ever more collective, perhaps privacy will be looked back upon as a human concept that existed until the 21st century.  Maybe acceptance of a loss in privacy is part of the painful birth of a new stage of humanity.  Right or wrong, this may well be what in fact, is occurring”

email
Prev: Facebook: What are You Going to Do?
The Economic Slow Down Ahead: Next