Historical Disruption in the Automobile Industry 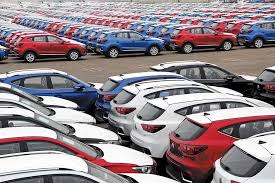 Now, this same industry, much more global than ever before, is at a historical inflection point.  The source of power is changing from fossil fuels to electricity.  The ICE vehicles are giving way to EVs.  Several companies have already stated that they see stopping production of ICE vehicles in the years ahead.  The dye has been cast, the world is moving away from ICE vehicles.

Readers know that I am a big fan of Elon Musk because everything he does is oriented to the future and to reinvent a future that is both visionary and sustainable.  In the past, the Big Three auto companies in America have been successful in taking down the mavericks who marched to a different drum in ways that threatened the status quo.  This has been a narrative with Musk, that when the big, slumbering giants of the automotive industry awake into the new electric reality he would be wiped out.  This is not going to happen.

In 2018, the number one, best-selling sedan made in America was the Tesla 3.  The top two sedans were Toyota and four and five were Hondas.  Tesla is made in America.  The obvious reason for this is that American automobile companies are slowing and stopping the production of sedans in favor of all different sizes of SUVs and pick-ups.  Another way of looking at this is that Tesla, before the Model 3 rolled off the production line, had more people on their $1,000 deposit waiting list than GM has sold to date with their Bolt.    The Model 3 was also the best- selling EV in the world in 2018

So EVs are the future.  To cement that reality, GM has discontinued their Volt hybrid, a car I wrote about back in 2007 when it was first announced. Why?  It is a hybrid and the general view forward by most automobile companies is that the move will be for EVs and that hybrids will go away.

What else is about to happen to the automobile industry?

As I wrote in my column last week, the legacy thinking in the auto industry is buying new cars.  Now that model is collapsing.  The industry moved from sales to leasing to prop up top line decades ago.  Now they are moving to new car rental, something unthinkable a decade ago.  In addition as noted in the same column is the reality that there are now rapidly growing rental models with used cars.

The used car market in the US is much bigger than the new car market.  In 2018 there were some 40 million used cars sold versus some 17 million new cars and trucks.  Increasingly through the coming decade ICE vehicles will be sold in the used marketplace.  [I have never liked the “previously owned” name for used cars].

An additional reality for all auto companies is the growing consciousness about the climate crisis.  In my just completed eBook trilogy “Moving to a Finite Earth Economy -Crew Manual”, written with Bob Leonard, we state the obvious, that the word “used” will become ever more respected.  Used means that something new – which takes resources from Spaceship Earth- will not be bought.  Buying used is infinitely more sustainable than buying anything new.  This will start to impact the auto industry ever more.

The current reality is vastly different than 20 years ago.   In terms of new vehicle production, the US is only the 6th largest national market after China, Japan, Germany, India and South Korea.  America is no longer the leader in production.  In addition, China is the largest producer of EVs, followed by the EU, with the US in third place.

Borrowed from the Peak Oil concept from earlier in this century – which stated that half of all the obtainable oil in the earth had been used and that we were moving into the remaining half- we are entering Peak Auto.  This relates more to the coming of autonomous vehicles than anything else.

The average American uses their car only 4% percent of the time.  The rest of the time it is parked somewhere. It is estimated that autonomous autos can function 22 hours in a day [the other two hours needed for charging].  This means that, perhaps by 2030, there could be 25-40% fewer cars on the road in the US.  Currently it is estimated that there are 276 million cars in America.   My forecast is that this number might be down to 200 million or less by 203.

The future of green and clean transportation is using the existing infrastructure – the Interstate Highway System- but with fewer vehicles.  This both faces the realities of personal transport and that governments do not have funds to create new infrastructures for such things as light rail.  In China, there are 300 km/hour trains everywhere.  Why, the government owns the land and can put high speed and light rail anywhere it wants.  In America we have property rights, which is why a light rail system between S.F and L.A will never happen.

Email
Prev: Moving from an Ownership to a Rental/Access Economy
Moving to a Finite Earth Economy – Now!: Next